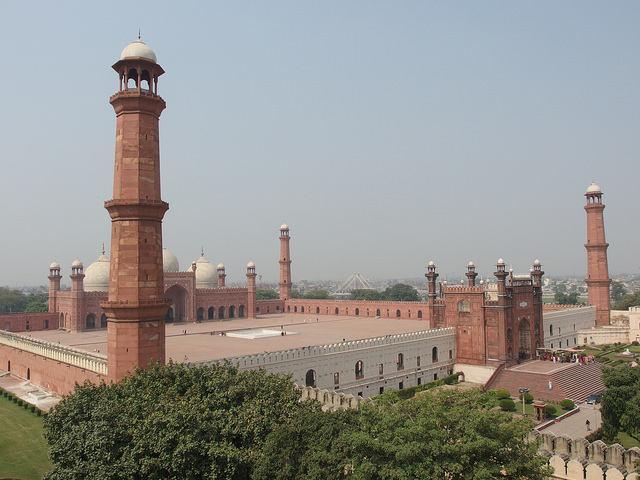 Everyplace has its charm, whichis a part of the elegance it bores. Lahore, like any other beautiful city has its own wonderful assets that make it a charming place to visit. Lahore with its heritage, history, and culture had made itself a great place to visit. So when visiting Pakistan, Lahore should be the “must visit” part of your itinerary. There are several beautiful places to see in Lahore. Here are seven places to drop by.

Photo by Guilhem Vellut, CC BY 2.0

Lahore was always a fortified city and the fortress built by the Mughals during 15th to 19th century is still there. Thishistoricfort of architecture is what we today know as the Walled city. The fort was a residential fort of Mughal rulers and it was used as the winter home for the royal family. When the Sikh rulers took over, the fort lost its beauty. However, during the British rule, they took overand restored the fort. Lahore Fort is an UNESCO site and on the World Heritage List. There are several places to see in the fort including the Diwan-e-Aam, Diwan-e-Khas, Shahjahan’s living quarters and the ShahiHimams. The magnificent living quarters of Shah Jahan gives a clear view of the Sheesh Mahal (palace of Glass) and the NaulakhaMahal (The 9 lakh palace). There are other small museums inside the fort, which displays the historical items of all the dynasties staying in this fort. The tomb of Sikh ruler, Ranjit Singh is also located here.

Photo by Shaun Metcalfe, CC BY 2.0

Built by Mughal emperor Aurangzeb, this mosque was the largest mosque in the world for a long time. The mosque is an epitome of grandeur, beauty, and passion of the Mughal era. It is one of the most attractive and most visited tourist attractions in Lahore. Today, this mosque is the second largest mosque in South Asia and the fifth largest in the world. The architectural plan of this divine place is like Jama Masjid. The monument also functions as an idgah. The Badshahi Mosque is also another UNESCO world heritage site.

Photo by Guilhem Vellut, CC BY 2.0

The Inner city is a beautiful place to visit. The place is full of palaces and shrines that are a great reflection of the era gone by. The most impressive places inside the city however are the Imperial Baths and Asif Jah Haveli. Right in front is a park with the famous Minar-e-Pakistan located. This Minar was built in 1940 when the creation of separate Muslim state was recognized. This is an interesting place to visit, as the Inner city is a mix of the past and present Pakistan.

4. The Gates Of Inner City

The gates of the Inner City are a part of Walled city as whole. Owing to the number of gates present, they are considered as a separate site to visit. During the Mughal days, the city was surrounded by a 9-meter high brick wall, which had a rampart running around it. The rampart was for the protection of the city. A circular road around the rampart gave proper access to the city. There are total of 13 gates in the city, out of which only six remain functional. Most gates were destroyed or demolished during the various wars and riots, this city faced since time immemorial. Only Bhati Gate, Roshnai Gate, Kashmiri Gate, Delhi Gate, Lohari Gate, and Shairanwala Gate survive till date.

Photo by Guilhem Vellutm, CC BY 2.0

If you walk a little further from Jehangir’s Tomb, you will find the tomb of Noor Jahan. This tomb is a great place to visit. It has a beautiful epitaph inscribed on the tombstone of the late queen. The tomb of Noor Jahan is not preserved well, but it presents a glimpse of Mughal grandeur and true love. Noor Jahan was a widow when she came to New Delhi. After the death of her Afghan prince husband, she was sent to Delhi to serve as a slave. But destiny had something else planned for her. Emperor Jehangir fell in love with her and they got married in 1611. Noor Jahan ruled alongside Jehangir. She died at the age of 68 in the year 1645.

Mall Road offers an assortment of beautiful places to see that are rich in historical significance and at par with modern Lahore. This road houses the Lahore Museum, Toolington market (now a museum), GPO, Lahore Art Gallery, Old Campus of University of Punjab, National College of Arts and more. National College of Arts is the place where father of famous novelist Rudyard Kipling acted as the principal.

Lahore zoo is located in the heart of the city. The zoo was founded in 1872 and was considered a modern design zoo of that time. It is one of the oldest zoos in the Asian subcontinent. The Lahore zoo is a hot tourist spot throughout the year. The main gate of the zoo is located opposite of the WAPDA house.

These historically rich places of Lahore will surely mesmerize. During your visit to Lahore, do not forget to visit them.